St. Raphael the Archangel Church offers young Catholics an opportunity to grow in their faith and become more active in the Mass by becoming altar servers.  Altar servers are young people who assist the priest and deacon during Mass.

It is a great honor and privilege to serve at the Altar of our God as Pope John Paul II indicated in his inspiring address to altar servers on August 1, 2001.  In that address the Pope encourages altar servers to understand the responsibility they have in this service to the Church.  He said,

“The altar server has a privileged place in liturgical celebrations.  Those who serve at Mass present themselves to a community.  They experience from close at hand that Jesus Christ is present and active in every liturgy . . . In the liturgy, you are far more than mere ‘helpers of the parish priest’.  Above all, you are servants of Jesus Christ, the eternal High Priest.”

To assist at the altar as a server is one of the greatest sources of graces.  The server assists the priest and deacon at the Sacred Liturgy; a server is privileged to walk into the sanctuary.  The Mass is the Sacrifice of Calvary.  It is not a memorial but rather the Mass truly is the Sacrifice of Calvary.  For that reason, all servers must display the utmost respect and reverence.  For example, each time the server walks past the Tabernacle, the server is to genuflect on the right knee to our Lord who is truly present in the Eucharist (GIRM 274).

While assisting at the weekend Masses, the daily Masses, and other liturgical celebrations, it is important that servers be active participants in the liturgy that they listen, sing, and pray with the entire assembly.

What Are the Duties of Altar Servers?
Servers carry the cross and the processional candles, hold the book for the priest celebrant when he is not at the altar, carry the incense and censer, present the bread, wine, and water to the priest during the preparation of the gifts and assist him when he receives the gifts from the people, wash the hands of the priest, assist the priest celebrant and deacon as necessary.
Servers respond to the prayers and dialogues of the priest along with the congregation.  They also join in singing the hymns and other chants of the liturgy.

Who Invented Altar Servers?
Altar servers have a rich heritage, going back to Jesus himself.  In preparation for the Last Supper, Jesus sent two of his disciples to prepare the Passover for Himself and the Twelve.  Over the centuries, as ceremonies became more complex and Latin became the language of the Church, specially trained assistants called Acolytes became common.  Eventually this evolved into today’s altar servers who love Jesus, love the Mass, and want to give their time and talents in the service of God and his Church.

Both boys and girls in 4th Grade or above, who have received first communion, are invited to become altar servers.  Training to become a server begins at the end of 3rd grade.  If you are interested, please contact the rectory at 314-352-8100. 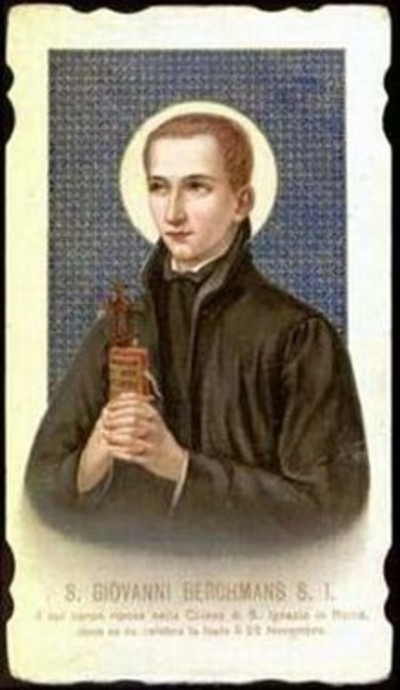 John Berchmans.  Often depicted with hands clasped, holding his crucifix, his book of rules, and his rosary.  Saint John Berchmans, SJ (Dutch: Jan Berchmans) (13 March 1599 – 13 August 1621) was a Jesuit scholastic and is a saint in the Roman Catholic Church.  He is the patron saint of altar servers.

Altar Server’s Prayer
Open my mouth, O Lord, to bless your Holy Name.
Cleanse my heart from all evil and distracting thoughts.
Enlighten my understanding and inflame my will that I may serve more worthily at your holy altar.

O Mary, Mother of Christ the High Priest, obtain for me the most important grace of knowing my vocation in life.
Grant me a true spirit of faith and humble obedience so that I may ever behold the priest as a representative of God and willingly follow him in the Way, the Truth, and the Life of Christ.